12th standard pass from a recognized board or university

NOTE-I: As per Ministry of Human Resource Development Notification dated 10.06.2015 published in the Gazette of India all the degrees/ diplomas/ certificates awarded through Open and Distance Learning mode of education by the Universities established by an Act of Parliament or State Legislature, Institutions Deemed to be Universities under Section 3 of the University Grants Commission Act, 1956 and Institutions of National Importance declared under an Act of Parliament stand automatically recognized for the purpose of employment to posts and services under the Central Government provided they have been approved by the Distance Education Bureau, University Grants Commission. However, such degrees should be recognized for the relevant period when the candidate acquired the said qualification.

NOTE-II: As per UGC (Open and Distance Learning) Regulations, 2017 published in official Gazette on 23-06-2017, under Part-III (8) (v), the programmes in engineering, medicine, dental, nursing, pharmacy, architecture and physiotherapy etc are not permitted to be offered under Open and Distance Learning mode. However, pursuant to the Hon‟ble Supreme Court Order dated 11-03-2019 in MA No. 3092/2018 in W.P. (C) No. 382/2018 titled Mukul Kumar Sharma & others Vs AICTE and others, B. Tech. degree/ diploma in Engineering awarded by IGNOU to the students who were enrolled up to academic year 2009-10 shall be treated as valid, wherever applicable.

NOTE-III: The candidates who are able to prove, by documentary evidence, that the result of the qualifying examination was declared on or before the cut-off date and he/ she has been declared passed, will also be considered to meet the educational qualification. It is reiterated that the result of requisite educational qualification must have been declared by the concerned Board by the specified date. Mere processing of the result by the Board by the crucial cut-off date does not fulfill the EQ requirement.

NOTE-IV: NO EDUCATIONAL/PROFESSIONAL CERTIFICATE IS NEEDED FOR STENOGRAPHY TEST.

Permissible relaxation in upper age limit and category codes for claiming age relaxation are as follows: 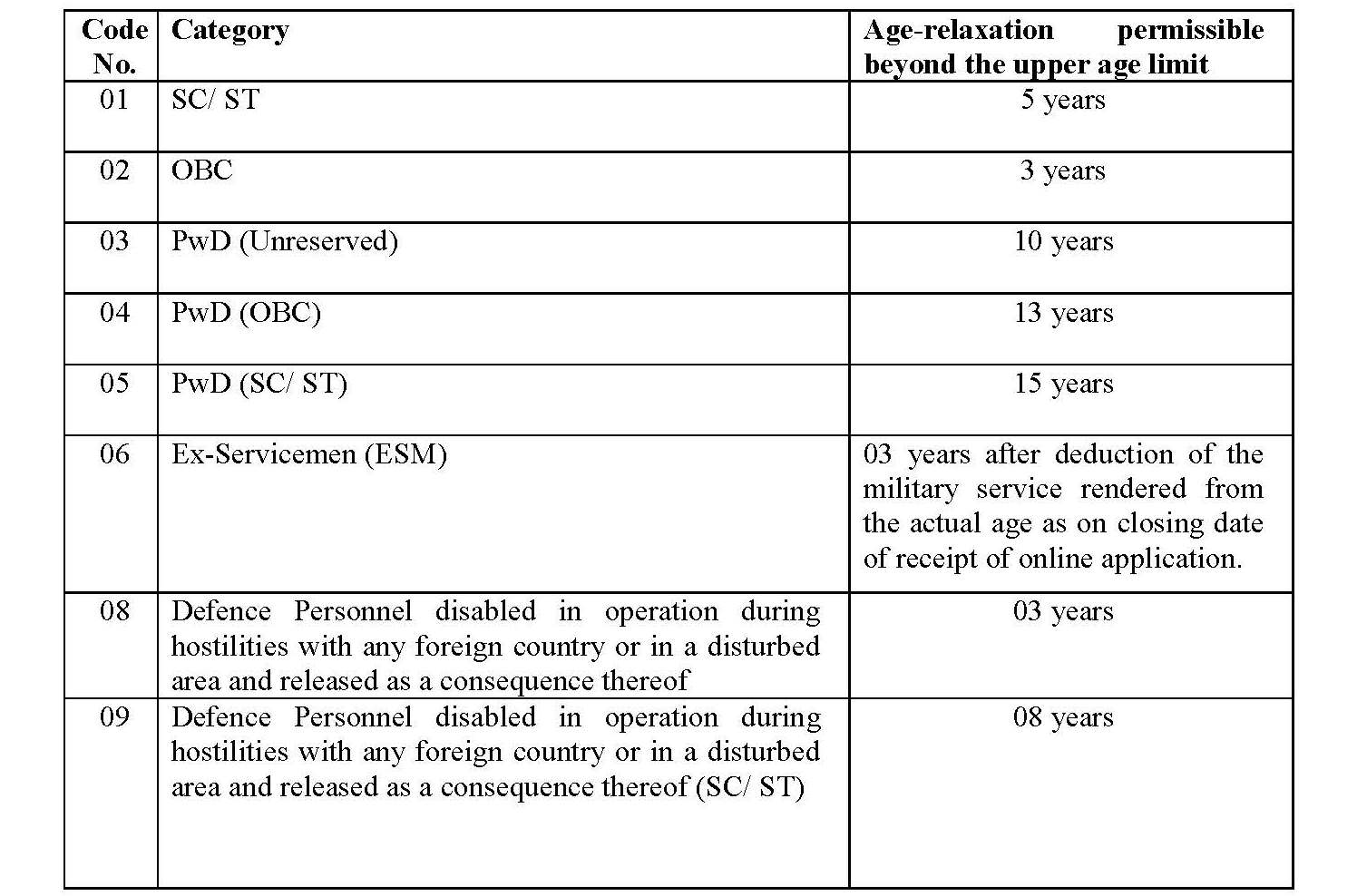 NOTE-I:Ex-servicemen (ESM) who have already secured employment in civil side under Central Government in Group ‘C’ & ‘D’ posts on regular basis after availing of the benefits of reservation given to ex-servicemen for their re-employment are not eligible for reservation in ESM category and fee concession.

However, he/she can avail of the benefit of reservation as ex-serviceman for subsequent employment if he/she immediately after joining civil employment, gives self declaration/undertaking to the concerned employer about the date-wise details of application for various vacancies for which he/she had applied for before joining the initial civil employment as mentioned in the OM No.36034/1/2014-Estt (Res) dated 14th August 2014 issued by DOPT.

NOTE-III: Age relaxation is not admissible to sons, daughters and dependents of Ex-Servicemen. Therefore , such candidates should not indicate their category as ex-servicemen.