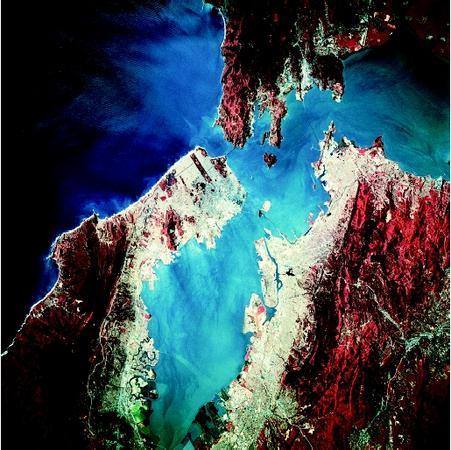 Bays, gulfs, and straits are types of water bodies that are contained within a larger body of water near land. These three water bodies are usually located at important points of human activities; thus, conflicts with nature and neighbors can
result.

A bay is a small body of water or a broad inlet that is set off from a larger body of water generally where the land curves inward. The San Francisco Bay, off the coast in northern California, is a well-known bay in the United States. Examples of other bays include the Bay of Pigs (Cuba), Hudson Bay (Canada), Chesapeake Bay (Maryland and Virginia), and Bay of Bengal (near India).

Bays usually occur on oceans, lakes, and gulfs, and generally not on rivers except when there is an artificially enlarged river mouth. An example of a bay at a river’s mouth is New York Bay, at the mouth of the Hudson River.

A gulf is a large body of water, sometimes with a narrow mouth, that is almost completely surrounded by land. It can be considered a large bay. The world’s largest gulf is the Gulf of Mexico. It is surrounded by Mexico, the southern coast of the United States, and Cuba, and contains many bays, such as Matagorda Bay (Texas) and Mobile Bay (Alabama). Examples of other gulfs include the Gulf of California, Gulf of Aden (between the Red Sea and the Arabian Sea), and the Persian Gulf (between Saudi Arabia and Iran). The Persian Gulf is important with respect to world energy because petroleum is transported through its waters in oil tankers.

Scientific investigations of the Gulf of Mexico have documented a large area off the coast of Louisiana with depleted oxygen levels, a condition known as hypoxia. Most aquatic species cannot survive at such low oxygen levels, and a so-called “dead
zone” results.

Also remember that Gulf of Mexico has longest coastline.

A strait is a narrow passageway of water, usually between continents or islands, or between two larger bodies of water. The Strait of Gibraltar is probably the world’s most famous strait. It connects the Atlantic Ocean on its west with the Mediterranean Sea on its east. It also separates northern Africa from the Rock of Gibraltar on the southernmost point of the Iberian Peninsula. Historically, almost all commerce between the Mediterranean Sea and Atlantic Ocean was routed through the Strait of Gibraltar. It is still an important route of international trade.

When a body of water such as a strait is capable of being blocked or even closed in order to control transportation routes, the body is called a “choke point.” Historically, the Strait of Gibraltar has been one of the world’s most important choke
points.

DOCUMENTS NEEDED FOR DOCUMENT VERIFICATION (FOR ALL SSC EXAMS/POSTS)