Computer proficiency test (CPT) has been prescribed as an essential qualification for the following posts of the Combined Graduate Level (CGL) Exam:

Computer Proficiency Test (CPT) is of qualifying nature only, means marks scored in this test are not counted in preparing the final result. If you fail in the CPT you can’t be selected for the post for which it’s compulsory. However you’ll be considered for all other posts in this case.

Data Entry Speed Test (DEST) at 8,000 (eight thousand) Key Depression per hour on Computer. The Data Entry Skill Test at 2000 (two thousand) key depressions for a duration of 15 (fifteen) minutes will be of qualifying nature. Computer will be provided by the Commission at the centre/venue notified for the purpose.  Candidates shall not be allowed to bring their own Key-board.

HH and VH candidates are not eligible for exemption from the skill test for both CBDT and CBIC.

NOTE-II: Only those VH candidates who opt for scribes in the written examination will be provided passage reader at the time of skill test.

NOTE-III: If one is failed in the DEST or skips it, is considered for all other preferred posts.

NOTE-III: Method of Evaluation of the DATA ENTRY SPEED TEST (DEST) and the TYPING TEST (Both English & Hindi) 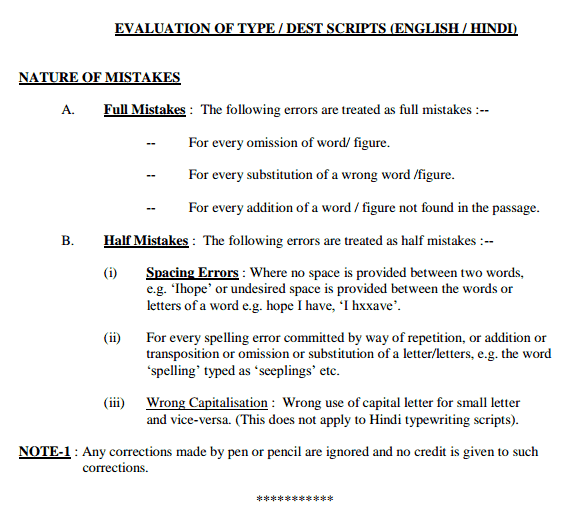 The Commission will hold a Computer Proficiency Test (CPT) for the following posts:

This test will be of qualifying nature and have the following three components:

1. Word Processing (DEST)—-This is same as is the SKILL TEST for the post of TA (plz read above)

NOTE-I: Scheme of DOPT for the post of Assistant Section Officer (CSS) does not envisage exemption from CPT for any category of PH candidates.

NOTE-II: All these tests are of 15 minutes each

NOTE-III: If anybody fails the CPT or chooses not to appear in it, he’ll be considered for all other posts if opted.

Venue: Allahabad. EXCEL and POWER POINT was easy. Excel was based on increase/decrease and percent formula. PPT carried hardly 7-8 lines in text box. Completed both well in time.

NOTE: Moral of the story: Please don’t get panic in typing, do it in slower speed than your usual speed and you will attain your rhythm after 1-2 lines.

DEST: First a trial passage was given followed by the main passage of 2000 key depressions to be done in 15 mins, next print out was taken and we were told to write 5 lines of the passage on a blank page.

POWER-POINT: applications on title, sub title, text, bullets, footer, alignment were tested and a passage was to be typed in the slide which was prety lengthy.

One title and 5 bullet points in the subtitle section were given and asked to reproduce. In the subtitle section, all the bullet points were kept in a rectangular box with some prescribed colour. Footer also asked to do. Careful about the printing area, although I had done ‘as it is’ in the system..the printout they made later had whole of my bullets gone on the left side. Examiner told that it is our responsibility that we reproduce that given in the printing area. I can see most of the Guys failed to do in this module.

DEST: Typing of a passage containing 2000-2200 characters to be typed on a software developed by SSC (in this software we have to type in a manner that we do on WORD-PAD) in 15 minutes i.e. @27 wpm (net).

Excel: I was given a table on some data containing the names of students with their marks in two subjects and was asked to find details regarding the sum and averages applying formulas on an Excel Spread Sheet.

NOTE: Both Excel and Power Point simultaneously  take hardly a ten day time to learn as in SSC it’s very much of simple nature.

5. Questions asked from a student

DEST: After 2 minute trial passage you will start actual passage.

EXCEL: Data was large like 6 digits numbers in cells and had to apply addition and percentage formulas. and one needed to change font size of cells as given in paper, also font type to aerial or any other font as given in paper, you may need to merge cells in table (in my set it was needed), others options like bold, underlined, center aligned will also be needed to use.

POWER-POINT: Just after after excel there was ppt, they distributed papers having picture of circle and having some points to be entered in it. we had to make a circle and enter some points with bulletting in circle, and to make background colour of circle brown (don’t know how to do it and probably most others also found background colour of circle changing to brown tough) and bulletting of points in circle.

One will need of use of bold option and to change font of title, subtitle etc also and font type may also be asked to change like in times roman now etc. all this got over till 12.40 pm.

Some CPT Questions on Excel 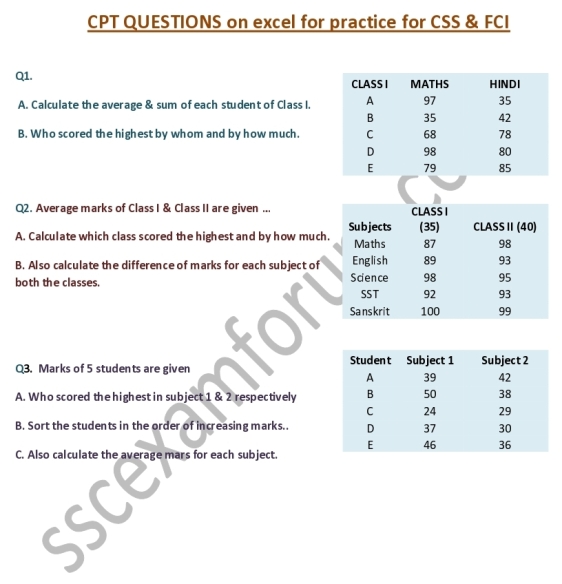 Some CPT Questions on POWER-POINT

Each & Every; Each other & One another; Another & Other (Explained in Hindi & English)

Fairly & Rather (Explained in Hindi & English)

Beside & Besides (Explained in Hindi & English)