Very useful for various competitive examination for the following:

vii) Grade-II DAAS of the DSSSB

FINITE VERBS
A verb that has its subject is called a Finite Verb; e.g.

a) Rahul is good player of cricket.
b) He sings very well.

In the first sentence the verb IS has Rahul as its subject and in the second the verb SINGS has HE as its subject, so both of these verbs are finite verbs.

NON-FINITE VERBS
A verb that does not have a subject, is called a Non-finite Verb. Such a verb does work of a noun or an adjective in a sentence. They are called INFINITIVES, GERUNDS and PARTICIPLES.

Understand this here:
A word referring to ‘an action or a state of being’ can work as either a verb or a noun or an adjective. If it works as a noun it is either the infinitive or gerund, and if it performs the action of an adjective it’s the participle. To understand this read it carefully.

They try to beat me.

We see that there are two action words in the above sentence TRY and BEAT. One of them is verb and the other not. Now, let’s try to find out the verb out of them. Of course we put WHO or WHAT before an action word to find the subject; if an answer is there to the question, it’s a verb, otherwise not. So two questions now are ’WHO TRY?’ and ‘WHO BEAT?’. We see that the question WHO TRY is giving an answer THEY, but the question WHO BEAT isn’t giving us any answer. So, we can say that the word TRY is the verb in the sentence, but the word BEAT not.

Now we’ll see what function the action word BEAT is doing here. We know that if we put WHOM or WHAT after the verb we get the object of that verb as our answer. But BEAT is an action word, so the question will be ‘TRY TO DO WHAT’, not just ‘TRY WHAT’. The answer to the question ‘TRY TO DO WHAT?’ is BEAT of course. Therefore we can say that BEAT is the object of the verb TRY. Also we know that an object is always a noun or pronoun. BEAT is not a pronoun at all, so it’s now clear that the action word BEAT is a noun here.

‘An action word or a state of being’ doing work of a noun is called an infinitive if it’s in the first form of a verb. So, BEAT is an infinitive in the above sentence.

1. I heard him sing a song.
[You can know from above that the verb here is HEARD, and SING an infinitive. Also SING is without TO; so it’s a bare
infinitive; and HIM: object of the verb HEARD]

4. She noticed him run away from the house. 5. They let him see the case file.

6. My mother bade me go to the bazar. 7. I overheard him say that he was thinking of moving to Nagpur.

NOTE-I: All these verbs except LET take full infinitive in the passive voice. See the following sentences in both active and passive; e.g.

NOTE-II: The basic verbs of sensation SEE, HEAR, FEEL, SMELL, and LISTEN (TO), NOTICE, OVERHEAR, WATCH can also be followed by OBJECT+PRESENT PARTICIPLE. What the Present Participle is made understood later in this chapter; e.g.

HELP
HELP is the only verb that may be followed by either the full infinitive or the bare infinitive; e.g.

1. Ram is swimming in the river at the moment.
2. Swimming is a good exercise.

Action words placed immediately after prepositions must be in the gerund form:

1. He left without making the payment. (WITHOUT: preposition; MAKING: gerund)

2. I apologize for not writing before. (FOR: preposition; WRITING: gerund)

3. She insisted on paying for herself. (ON: preposition; PAYING: gerund)

4. Before starting to attempt the paper, read the instructions carefully. (BEFORE: preposition; STARTING: gerund)

5. Have you any objection to going to her house? (TO: preposition; GOING: gerund)

A) PRESENT PARTICIPLE
Now see the given example once again ‘Yesterday Raman met a girl carrying a basket of flowers’. This sentence though is in the past, the participle CARRYING is in the present in fact. The action denoted by CARRYING was present when Raman met the girl, means she was carrying the basket at the time he met her. Such a participle is called present participle.

1. The old man is tired of WALKING.
2. WALKING along the road, Rohit noticed a dead cobra.

In the first sentence the word WALKING is used after a preposition, i.e. OF. We know that a preposition must follow a noun/pronoun. Hence, WALKING is a noun here; means a GERUND.

The present participle denotes an action going on or incomplete action.

See these examples on use of the present participle:
1. Loudly knocking at the gate, he asked to enter my room.

2. The child, thinking all was safe, attempted to cross the
road.

3. I see him passing my house every day.

4. The boy stood on the burning deck.

5. The weather being fine, I went out.

The word BURNT is describing the noun CHILD, hence it’s a participle here. As it’s in the third form of a verb, it represents a completed action/state of being (The child who was burnt already). So it’s called PAST PARTICIPLE.

1. Blinded by a dust storm, they fell into disorder.

2. Driven by hunger, he ate every thing.

3. We saw many trees laden with fruit.

2. The sun having risen, the fog disappeared.

COMMON ERRORS MADE IN USAGE OF PARTICIPLES

As a participle does work of an adjective it must have a noun/pronoun to describe. Sometimes that noun/pronoun is missing from the sentence. See these sentences to understand it well.

NOTE-I: But sometimes we do not need to mention the subject of a participle as it’s already understood; e.g.

Being ill, I could not attend the meeting.

[In this sentence we do not need to mention the subject with the participle BEING as it’s understood that ‘I’ itself is the
subject here.]

NOTE-II: Some participles are also there which do not need a noun/pronoun to be associated with, they are:

1. He performed well, considering his age.
2. Owing to his carelessness, the accident took place.

For complete chapter on INFINITIVE, GERUND AND PARTICIPLE and their uses read the following book authored by me. 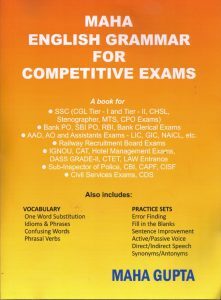 LINK FOR BUYING THE BOOK
CLICK HERE TO BUY

REGARDING DATE OF SUBMISSION OF OBC CERTIFICATE