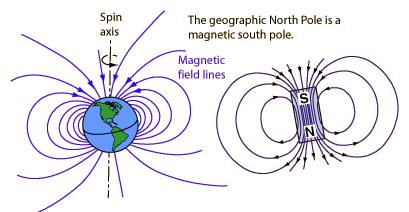 What causes a compass to point north

A magnetic compass needle responds to the magnetic field by aligning itself into a north–south direction, pointing to the place on the earth’s surface known as the magnetic north pole.

The locations of the magnetic and geographic poles are similar, but not exactly the same. The North Pole (also known as the geographic north pole) is the name given to the northern end of earth’s axis of rotation; the South Pole is the southern end.

When a compass is used for navigation, it points to the magnetic north pole rather than the geographic north pole. The difference in angle between geographic and magnetic north is called the declination, and it varies in different places. For example, in New Zealand in 2005, magnetic north was 18° east of north in Northland, increasing to 25° at Stewart Island.

For careful navigation, measurements made on a magnetic compass need to be corrected, to account for magnetic declination. In New Zealand this correction is normally shown on topographic maps, to assist trampers and others navigating an area.

As well as the longer-term changes in the earth’s magnetic field, there are short-term changes in the upper atmosphere. A continuous flow of charged particles from the sun produces very small daily variations, but when sunspots and solar flares excite the surface of the sun, far more particles are ejected. The interaction of these particles with the earth’s magnetic field produces auroras – undulating bands of light, visible in the night sky. These are part of the phenomena of a magnetic storm.