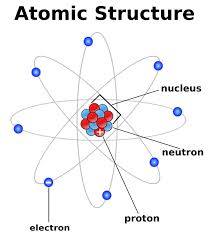 The first question is that WHAT IS AN ATOM??

All substances are made up of matter and the fundamental unit of matter is the atom. The atom constitutes the smallest particle of an element which can take part in chemical reactions and may or may not exist independently.

Now, What is the Structure of an Atom?

The history of the discovery of the atomic structure is outlined below:

John Dalton (1808) proposed the Atomic Theory. According to Dalton, matter is made up of tiny particles called atoms. The atom is the smallest particle of matter that takes part in a chemical reaction. Atoms are indivisible and cannot be created or destroyed. Further, atoms of the same element are identical in every respect.

James Chadwick (1932) discovered neutrons. According to Chadwick, atoms contain neutral particles called neutrons in their nucleus along with the subatomic particles (i.e., electrons and protons).

N. Bohr (1940) provided the modern concept of the atomic model. According to Bohr, the atom is made of a central nucleus containing protons (positively-charged) and neutrons (with no charge). The electrons (negatively-charged) revolve around the nucleus in different imaginary paths called orbits or shells.

Mass number of an element is the sum of the number of protons and neutrons in the nucleus of an atom.

The elements are arranged according to increasing atomic numbers (along with their atomic mass) in a table called the Periodic table.

Now, I would like to tell you about some experiments so that discovery of ELECTRON, PROTON & NEUTRON became possible.

Now question arises what cathode ray is
Thomson constructed a glass tube which was partially evacuated i.e. much of the air was pumped out of the tube. Then he applied a high electrical voltage between two electrodes at either end of the tube. He detected that a stream of particle (ray) was coming out from the negatively charged electrode (cathode) to positively charged electrode (anode). This ray is called cathode ray and the whole construction is called cathode ray tube.

The cathode ray particle turned out to be 2000 times lighter than hydrogen.

Although we got e/m ratio for electron from J.J. Thomson’s Cathode Ray Tube experiment, we still don’t know the exact charge (e) for electron. American physicist Robert Millikan designed an experiment to measure the absolute value of the charge of electron. It is called Millikan Oil Drop Experiment. In this experiment he measured the charge of an electron using negatively charged oil droplets. The measured charge (e) of an electron is −1.60×10^(−19) Coulombs.

Using the measured charge of electron, we can calculate the mass of electron from e/m ratio given by J. J. Thomson’s cathode ray experiment.

Results
Most of the particles pass through the foil without any deflection.
Some of the alpha particles deflect at small angle.
Very few even bounce back (1 in 20,000).

Conclusion
Based on his observations, Rutherford proposed the following structural features of an atom:

-Most of the atom’s mass and its entire positive charge are confined in a small core, called nucleus.
-Most of the volume of an atom is empty space.
-The number of negatively charged electrons dispersed outside the nucleus is same as number of positively charge in the nucleus. It explains the overall electrical neutrality of an atom.

Thus Rutherford only told about a positively charged Nucleus not about it’s contents.

From the previous discussion, we can see that the gold foil experiment gave a clear picture of the structure of an atom which consists of some special particles in nucleus and same number of electrons outside of this nucleus.

But scientists soon realized that the atomic model offered by Rutherford is not complete. Various experiments showed that mass of the nucleus is approximately twice than the number of proton. What is the origin of this additional mass? Rutherford postulated the existence of some neutral particle having mass similar to proton but there was no direct experimental evidence.

In 1930, W. Bothe and H. Becker found an electrically neutral radiation when they bombarded beryllium with alpha particle. They thought it was photons with high energy (gamma rays).

In 1932, Irène and Frédéric Joliot-Curie showed that this ray can eject protons when it hits paraffin or H-containing compounds.

The question arose that how mass less photon could eject protons which are 1836 times heavier than electrons. So the ejected rays in bombardment of beryllium with alpha particles cannot be photon. In 1932, James Chadwick performed the same experiment as Irène and Frédéric Joliot-Curie but he used many different target of bombardment besides paraffin. By analyzing the energies of different targets after bombardment he discovered the existence of a new particle which is charge less and has similar mass to proton. This particle is called neutron. Beryllium undergoes the following reaction when it is bombarded with alpha particle. 4(Be)9 + 2(α)4 => ⟶[6(C)13] => ⟶ 6(C)12 + 0(n)1. Here the symbol z(A)x is used where Z = atomic number and X = atomic mass of the element A.

conclusion
Atomic mass = mass of protons + mass of neutron. For a neutral atom, number of proton=number of electron.

Now, last but not least
Measured masses and charges of the three elementary particles are given as following-