Most of these questions are taken from the previous year’s examinations conducted by the Staff Selection Commission (SSC) on Geometry (Except Circle) of the Quantitative Aptitude (Maths) section of the following exams as well as other similar exams. They are all solved and supported by detailed explanation.

Amit jha
The circumcentre is at the intersection of the perpendicular bisectors of the triangle’s sides. It is a point in a triangle from which all vertices of that triangle are equidistant.
So in the given triangle OA = OB = OC

ABC is a triangle and its medians CD and BE intersect each other at M; then find the ratio of area of ∠MDE to the area of ∠ABC 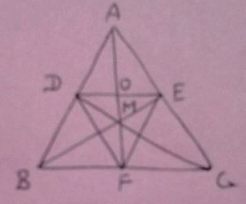 As CD and BE are medians, D and E are the mid-points of AB and AC respectively
Therefore DE = BC/2

Let height of ∠ABC be ‘h’, then height of ∠ADE = h/2 (by similarity of triangles)
and height of ∠MBC = h/3 (since median divides heights in the ratio 2:1)

The bisector of angle A of ΔABC cuts BC at D and the circumcircle of the triangle at E; then

What is the difference between the areas of the circumcircle and incircle of a regular polygon of length ‘2a’ as its side.

In a triangle ABC, the lengths of the sides AB and AC equal 17.5 cm and 9 cm respectively. Let D be a point on the line segment BC such that AD is perpendicular to BC. If AD = 3 cm, then what is the radius (in cm) of the circle circumscribing the triangle ABC?

Vijay Bharath Reddy
Area of a triangle circumscribed by a circle = abc/(4r), where a, b, c are sides of the triangle & r the radius of the circle.

Also area of a triangle = base*height/2

Therefore according to the question

Here we see that these sides are making a right triangle

In the given figure AD is the bisector of angle A, find AC. 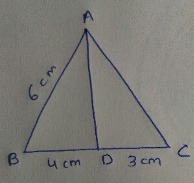 MAHA GUPTA
Here the ANGLE BISECTOR OF TRIANGLE theorem will apply. According to this theorem an angle bisector of an angle of a triangle divides the opposite side in two segments that are proportional to the other two sides of the triangle.

If O is the orthocenter of the ΔABC and ∠BAC = 80, then measure of ∠BOC is?

Atul Roy
The intersection of the three lines which passes through the 3 vertices of a triangle and perpendicular to opposite 3 sides is called orthocenter.