Most of these questions are taken from the previous year’s examinations conducted by the Staff Selection Commission (SSC) on Geometry (Except Circle) of the Quantitative Aptitude (Maths) section of the following exams as well as other similar exams. They are all solved and supported by detailed explanation. 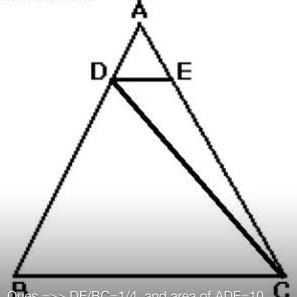 The bisector of the ∠BAC of ΔABC intersects the side BC at the point D and meets the circumcircle of the ΔABC at E. Then, when it’s always true AB × AC + DE × AE =

In a right angle triangle ABC, AD is perpendicular to hypotenuse BC. If AC = 2AB, then the value of BD will be? 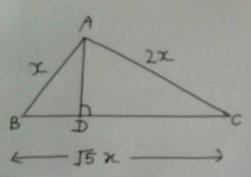 Also both triangles ADB and ADC are right triangles in which AB and AC are their hypotenuse respectively;
So in ΔADB, AD = AB² – BD²
And in ΔADC, AD = AC² – CD²

Also ∠ACB is an exterior angle of this triangle

As an exterior angle of a triangle is equal to the sum of the two opposite (non-adjacent) interior angles; therefore ∠ACB = ∠CAD + ∠CDA 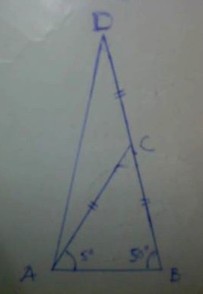 In triangles ACP and ABC
∠A = ∠A (common angles)
and ∠ACP = ∠ABC (given)
Therefore by AA, both the triangles are similar 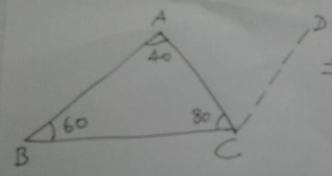 Inside a square ABCD, ΔBEC is an equilateral triangle. If CE and BD intersect at O, then ∠BOC = ? 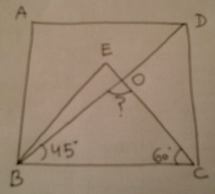 The angles of an acute angle triangle are all distinct integers. If the smallest angle has the largest possible value, find the sum of two other angles.

MAHA GUPTA
If all the angles are distinct integers and the smallest angle has the largest possible value, they must be consecutive integers.